Manchester City can close a deal for Napoli’s Kalidou Koulibaly at €75m this summer, although his fate is unlikely to be decided until they’re done with the Champions League.

That’s what Gazzetta Dello Sport report today, providing yet another update on the Senegalese defender’s potential move to the Etihad.

Koulibaly has been heavily linked with a move away from Napoli again this summer, with it believed that Gennaro Gattuso would be overseeing something of an overhaul of the squad he inherited from Carlo Ancelotti.

As you would expect, Koulibaly has subsequently been linked to all of the big clubs in Europe, and one of those is Manchester City.

It’s been established that Pep Guardiola is keen to add at least one centre back to his squad this summer, with the position having caused numerous problems for him this season.

Koulibaly would be a significant upgrade on his current options, and there has been a steady stream of rumours that Manchester City chiefs are working on a deal for him.

Gazzetta cover that today and say that while Napoli chief Aurelio De Laurentiis ‘holds out’ and Koulibaly ‘swears loyalty’ to Naples, the rumour mill insists he will be in the Premier League by October 5th.

Behind the scenes, it is much different, with City having already made a proposal of €65m in ‘recent weeks’, which was rejected as it’s nowhere near Napoli’s €100m asking price.

Undeterred, his agent Fali Ramadani and his staff ‘weave the cloth’ on a ‘delicate operation’ but Manchester City are cautious about being stung like they were with Jorginho in 2018.

That, of course, is something we’ve seen claimed already. 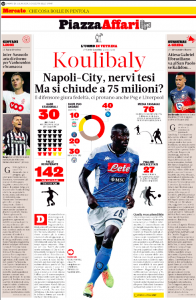 Either way, they’re said to proceed with ‘great caution, not to mention mistrust’ at this moment in time, with Koulibaly ‘putting on a good face’ so he doesn’t do any damage to the negotiations.

However, while City are moving cautiously, there are rivals in the background. Gazzetta say that both Liverpool and PSG are ‘back for information’ about the player.

That means the game is ‘only beginning’, which will suit De Laurentiis as he loves a good auction to ramp up the value on his players.

He obviously wants as much as possible if Koulibaly is to leave and a source behind the scenes has told Gazzetta a deal can be closed at €75m, although Manchester City are only likely to go up to €70m and ‘not right away’.

Their belief, and this something they make clear throughout, is that Pep Guardiola and co are moving slowly and only when they’re done with the Champions League will the ‘marathon’ for Koulibaly come to life.