Manchester City are continuing to pursue Napoli defender Kalidou Koulibaly with a ‘mad and suffocating pressing’ as their summer rebuild continues.

Pep Guardiola’s side have already completed deals for defender Nathan Aké and winger Ferran Torres this summer, with the Spanish coach keen to overhaul his squad.

Improving his defence is key, and Koulibaly has been named as a major target in that regard for several months.

So far Manchester City have been unable to agree on an asking price with Napoli, though, as their president Aurelio de Laurentiis holds out for as much money as possible.

The two clubs are far apart in that regard at the moment but, according to Corriere Dello Sport, City are not giving up their pursuit. In fact, the opposite is true.

The newspaper says that they are as keen to get a deal done as ever and are pursuing it with a ‘mad and suffocating pressure’. So much so that Koulibaly’s future at the club ‘hangs by a thread’.

In the meantime, Corriere claim Koulibaly’s agent Fali Ramadani arrived on the island of Capri yesterday to meet with De Laurentiis to work out a deal for Koulibaly and an extension for fellow defender Nikola Maksimović.

His presence on Capri, however, has been disputed, with Sky Sports journalist Luca Marchetti stating as much on Marte Sport Live, relayed by Area Napoli.

“Kalidou’s agent, Fali Ramadani, is in Capri with Aurelio De Laurentiis? He met him yesterday in Milan, not in Capri,” he said.

“Ramadani often comes to Italy, his presence may perhaps be significant, even if he has not been spotted in Capri but in Lombardy.

“Interest remains on Koulibaly, despite Manchester City having bought Nathan Akè. In short, the English club could reinforce itself with more men.”

The problem, however, is that asking price. Corriere explain that the deal will be ‘complex’ because of the ‘scale of the deal’ Manchester City are trying to set up.

So far they have offered €70m as a ‘fixed base’ with potential bonuses taking that higher, to an (as of now) unknown figure. 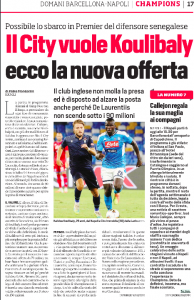 That offer was made ‘weeks ago’ but ‘politely refused’ by Napoli, who made it clear that it needed a lot of ‘tweaking’ because they want at least €90m.

That’s a figure they consider as fair given Koulibaly has a €150m release clause exclusively for clubs outside of Italy in his contract.

Koulibaly, for his part, is keen on the move to Manchester City, even after their capture of Aké this week and because of this City are ahead of the competition from him – Liverpool, Manchester United and PSG are named specifically.

However, until they match Napoli’s asking price or lower it, it seems there will be no deal. That is something Ramadani is working to avoid.

He is said to have ‘evaluated every aspect’ alongside De Laurentiis but will continue to do so in the coming days in negotiations that the newspaper believes will be ‘very intense’.