Despite Riyad Mahrez excelling at Manchester City this season, the forward’s future at the club remains somewhat in doubt.

Contracted at the Etihad until 2023, the Algeria international is now 31, meaning a long-term extension is probably out of the question.

Whether he gets sold in the summer remains to be seen, but it appears that Manchester City are looking to the future, if Tuttosport are to be believed.

The Italian newspaper name the Premier League leaders as one of the clubs looking at Ajax Amsterdam’s Antony, who boasts 12 goals and 10 assists in 33 appearances this season for the Eredivisie side. 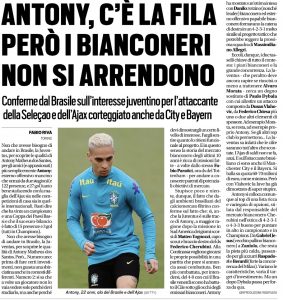 He’s caught the eye of many big clubs, including Juventus, who are likely to face competition from abroad for his signature.

The two named in Tuttosport’s article are Manchester City and Bayern Munich, with it made clear that Ajax ‘do not do sales’ if they are to sell the Brazilian.

In fact, it’s said a fee of €60-70m ‘minimum’ will be needed to convince the Dutch club to part ways with Antony, which would certainly place Pep Guardiola’s side in the lead, considering the money they tend to have at their disposal.