Manchester City continue being named as one of the contenders for the signing of Sporting full-back Nuno Mendes in the summer.

Today we see the interest from Pep Guardiola’s side being highlighted by two different newspapers, with one of the stories coming from Jornal de Notícias.

In an article about Mendes’ recovery from an injury, it’s claimed he continues to attract the chase from ‘European giants’.

The newspaper says Barcelona and Manchester City are the ‘main interested’ in his signing, pointing out that he’s protected by a release clause of €70m.

The other outlet who today has something to say on Mendes’ future is Record. 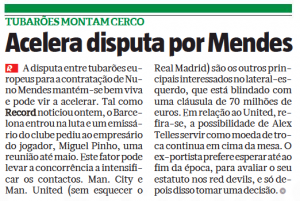 Just yesterday, they had reported that Barcelona ‘joined the fight’ by contacting the player’s agent Miguel Pinho.

Now they claim this factor could make the competition, which is made up of Manchester City, Manchester United and Real Madrid, to ‘intensify the contacts’ for the signing.

They once again highlight the player’s release clause, and considering how big this battle has been getting lately, it’s indeed likely Sporting will manage to get a good price for the 18-year-old.