For the past couple of weeks, the Portuguese press had been saying that Manchester City could sign the São Paulo wonderkid Antony.

The Premier League sign would buy the Brazilian on a permanent deal, and then loan him out to Sporting, as part of a partnership between the clubs.

Then today, newspaper O Jogo brought an interesting story, explaining how the deal between the two clubs should work from now on.

They also bring a paragraph about Antony, but this time, they claim the transfer won’t not be part of the plans anymore. 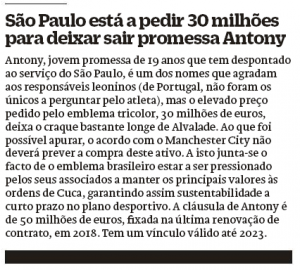 The newspaper reports that São Paulo are demanding €30m for Antony, and that leaves him ‘far’ from Sporting. That’s why they’ve learned that not even the agreement between the clubs should bring him to Europe.

São Paulo are unlikely to negotiate for less, since the club has been under pressure for not keeping young stars. So whoever comes for him, will really have to pay that amount, and that seems to be a lot for Manchester City to simply loan him out afterwards.