Home Europe Manchester City ‘getting hotter’ for signing – Guardiola’s side throwing themselves into...
SHARE

There’s a reasonable chance that most issues of SportBild between now and the end of the season will contain a story on the future of Erling Haaland.

Following on from that, there’s also a reasonable chance that most of those stories will contain at least a mention of Manchester City.

That’s the situation with the German magazine this week, as they have an article on ‘The Haaland case’.

According to the claims, Manchester City are ‘getting hotter’ for the Borussia Dortmund player, whereas Real Madrid are now going ‘colder’. SportBild say the chances of Haaland staying at BVB beyond next summer, when his exit clause becomes active, are ‘extremely slim’.

Manchester City have thrown themselves into the ‘poker’, having failed to sign Harry Kane from Tottenham Hotspur during the summer. For the next summer market, it’s stated the club would have Kane and Haaland at the top of their list, presumably trying to get one of the strikers, and not both.

The only other thing they have to say on Manchester City is this: ‘Thanks to the multi-billion dollar group of investors from Abu Dhabi, the at least EUR 75 million transfer fee 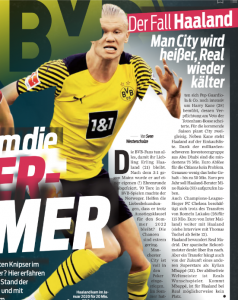 for the Citizens is no problem. Neither is the high salary – Haaland consultant Mino Raiola (53) is said to have asked for up to 50 million euros per year.’

And that is it.

There’s not a great deal, or anything really, in this report which was unknown before.

Manchester City need a striker, and Real Madrid would prefer Kylian Mbappe. SportBild also throw a Chelsea mention in, but there’s not much in that either.