Famalicão are in talks for the signing of Manchester City striker Pablo Moreno, according to claims from Portugal.

Newspaper Record says the 19-year-old has become a ‘strong hypothesis’ for the Portuguese club this summer.

It’s said that even though there’s competition for his signing, the youngster ‘should’ indeed head to Famalicão on a one-year loan deal.

Among those who are interested the youngster, there are other Portuguese clubs and also Spanish side Girona, who had him on a temporary spell last season. 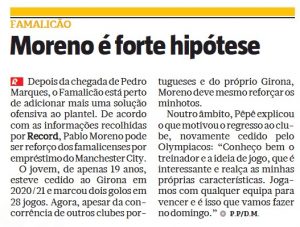 Pablo Moreno has an impressive academy record as he’s belonged to both Barcelona and Juventus. He left the Italian giants for Manchester City in a €10m deal back last summer.

The Premier League side immediately loaned him out to Girona, where he had two goals in 29 appearances. Now it looks like, for some reason, Pep Guardiola would rather let the youngster develop in Portugal instead of his home country.

Moreno has a contract with Manchester City running until 2025.