Portuguese side Sporting have turned down a bid from Manchester City for full-back Nuno Mendes, according to reports from the Lisbon media.

Newspaper Record says the Premier League side placed an offer of €25m plus a player at the Lions’ choice, but that wasn’t enough to convince the club and got turned down.

It’s said Sporting continue to demand €50m for Mendes, and there’s the ‘conviction’ that, sooner or later, he’ll end up moving to a ‘big shark’ in Europe.

The club have big faith in his potential and consider that it’s ‘inevitable’ that he’ll leave them, even if he only moves in the January transfer window, like Bruno Fernandes did last year. 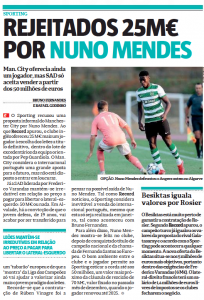 Manchester City have been linked to Nuno Mendes for a few months now, and were always pointed out by the Portuguese press as the front-runners in the race.

For the past couple of weeks, it’s been repeated many times that Pep Guardiola’s side hadn’t made a bid despite their interest, but that seems to finally be changing now.

Sporting’s demand to let the player go had always been of €50m, at least according to local reports, so this first bid from City sounds like the English club testing the waters to see how serious the Lions are about it.