As Manchester City wait for the arrival of Julian Alvarez, who’s expected to join the club this summer following an agreement with River Plate, it’s clear that Pep Guardiola’s side are attentive to what’s happening in Argentine football.

Now it seems the striker isn’t the only player from the Buenos Aires’ side that the Citizens are interested in, because according to reports today, their eyes are also set on Enzo Fernandez.

The story is brought by Portuguese newspaper Record, who write about Benfica’s pursuit for the 21-year-old. They say the Eagles have a club official in South America to negotiate the transfer.

Then at the end of the story, the outlet claims the competition could make things difficult for Benfica. That’s because he drew attention from the likes of Real Madrid and Manchester City. 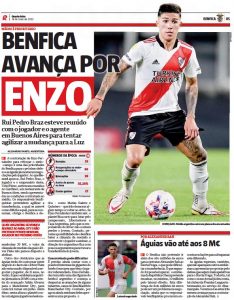 Benfica seem to be moving faster, as there’s no offer from Real Madrid or Manchester City so far. Despite that, there’s a reason they’re called ‘sharks’, as both clubs have the conditions to put up a good fight for the signing.

Enzo Fernandez is protected by a release clause worth €20m. Just like with Julian Fernandez, River Plate are also demanding those figures to let him go, and Benfica now work to reach a deal with the Argentine side.