Manchester City midfielder David Silva could respond to Lazio’s offer next week as he ponders his next move after leaving the Etihad.

The Spanish midfielder is bringing an end to his ten-year stay in Manchester this summer, electing to head to pastures new for the final year of his contract.

The assumption was that he would move to somewhere like the MLS or Qatar for one last payday, but that has changed in recent weeks with offers seemingly on the table in Europe.

One of those is Lazio, whose interest Corriere Dello Sport cover today, providing an in-depth update on their efforts to lure Silva to Rome.

The newspaper explains Lazio’s contact with Silva has been done via ‘mutual acquaintances’ and the Italian side had been hoping to ‘work in the shadows’ on a deal.

That has not been possible as their move for the Manchester City legend was made public and in the process made all the more difficult.

They are keen to bring him to the club as they believe he would not only represent a ‘coup’ but also provide manager Simone Inzaghi with a player he could use in several ways.

Silva is open to the move as he would like to stay in Europe, preferring to avoid venturing to different countries given the situation around the Coronavirus epidemic.

Playing in Rome ‘entices him’ as he would be able to play in the Champions League, although former club Valencia are considered a ‘formidable opponent’ in the bidding.

The biggest problem is his wages. Silva earns €10m a year a Manchester City, a figure he could only match with a move to ‘Arabia, China and America’. 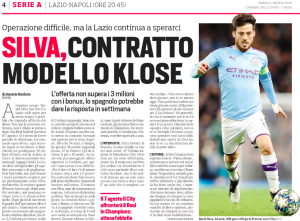 And while Lazio are keen on him, they ‘won’t do a madness’.

Thus, they are willing to offer him €2.5m a year plus bonuses, taking it to around €3m a year.

Any notion of a deal worth €4m, which has been mooted, have been ‘refuted’ as they are considered ‘unreal figures’.

Indeed, it’s made clear Lazio cannot match any offers above €3m, but they are offering the 34-year-old a two-year deal with an option of a third, which could prove enticing.

At the moment Silva is deliberating what to do next, and Corriere believe that ‘it is possible’ he will respond to Lazio’s offer next week after taking a ‘short period of reflection’ to decide his next move.