You will not be surprised to hear this, but Manchester City are still interested in Napoli’s Fabián Ruiz.

The Spanish midfielder remains one of the more important assets the Serie A club have at their disposal, and while they are seemingly prepared to part ways with Kalidou Koulibaly this summer, the stance for the 23-year-old is different.

According to Corriere dello Sport over the weekend, the former Betis star is being ‘courted’ by three big European clubs: Barcelona, Real Madrid and Manchester City.

They explain the latter of the three have a Catalan ‘control tower’ at the top of their staff pyramid, with Ferran Soriano and Pep Guardiola overseeing what goes on at the club, ‘capable of grasping any signal, even the most imperceptible, coming from football’.

Of course, none of this matters if Napoli don’t want to sell, which is exactly what’s happening. 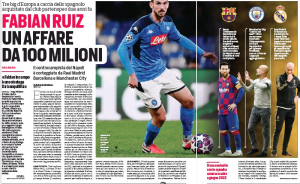 Despite the advances of the aforementioned trio, Aurelio De Laurentiis is reportedly prepared to ‘resist until the bitter end’ to keep his prized possession in the south of Italy a little longer.

There’s talk of a €100m valuation, but that appears to be coming from the Spanish press, even if it appears the Italian media don’t seem to disagree with it.

Either way, convincing the Napoli owner looks like quite the ask, and with clubs likely operating on smaller budgets this summer due to the currently ongoing Covid-19 pandemic, he might just get his wish.