Back when Benfica striker Darwin Nunez scored two goals against Barcelona and the rumours about his future were spreading throughout the media, Manchester City were named as one of the contenders for his signing.

Pep Guardiola’s side have already been linked to the player in the past, and with his great start of season in Lisbon, it was claimed the chase would be back on.

Now Benfica had another big Champions League clash last night, this time against Bayern Munich, and that of course attracted the interest from several European sides.

As reported by newspaper O Jogo, Manchester City were one of them, with the club sending an official to Lisbon, but that was maybe not the best opportunity to watch Nunez in action, as Bayern Munich won the tie 4-0, with the Eagles having few chances throughout. 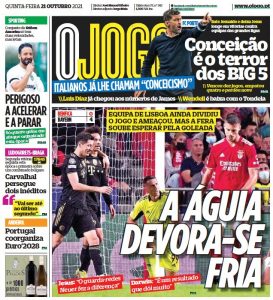 Still, we see O Jogo naming the Uruguayan starlet as Benfica’s best player in the match.

“Truly devilish, the Uruguayan international took off in strength and speed, leaving the opponent on constant alert,” says the newspaper.

“He looked for and explored the spaces well, allowed the team to breathe and almost opened the scoring in favour of the Eagles, if it not for the great save, at 32’, by Neuer, preventing the celebration of the striker”.

Other Benfica players who were praised by the Portuguese media were Odysseas Vlachodimos, Lucas Veríssimo and João Mário and perhaps one of them may have drawn the interest from Manchester City scouts as well.