Two days ago, we carried a report from Sport, who claimed Matthijs de Ligt is ‘closer to Manchester City’ and they will face competition from Barcelona for the Ajax defender.

Saturday’s edition of another Catalan newspaper, Mundo Deportivo, once again mentions the aforementioned clubs’ interest in the 19-year-old, while there are a few other clubs also looking to land him.

The Premier League winners and Paris Saint-Germain were keen on securing the services of the centre-back’s teammate Frenkie de Jong, but the Catalan club managed to beat the two sides in signing the midfielder.

PSG and Pep Guardiola’s side, along with the likes of Juventus and Bayern Munich are ‘betting very hand’ on De Ligt.

It’s explained in the report that Ajax have slapped a €60m price tag on the Netherlands international and despite interest from top clubs across Europe, De Ligt’s will is join Barcelona. 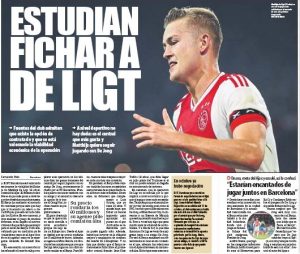 So far, the La Liga winners have not taken a decision, but are ‘seriously’ considering the feasibility to sign the Ajax centre-half.

Any approach from City or Barca in signing De Ligt will see them face tough competition.