It seems the race for the Benfica starlet João Félix may come to an end sooner than we expect. And now Manchester City have been pulled in.

According to newspaper Correio da Manhã today, agent Jorge Mendes has been making some moves so the player can be transfered in the next summer window.

The outlet says the agent is ‘blocking’ Félix’s contract renewal with Benfica, who are hoping to increase his release clause from €120m to €200m.

Correio da Manhã says that Mendes is today meeting Juventus in Turin, as the Old Lady try to beat the competition and guarantee the signing for the next season. 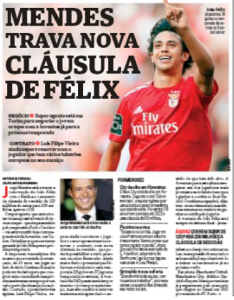 The newspaper doesn’t seem to know how advanced things are, since they take claims from the Italian press to say that João Félix’s wish to play with Cristiano Ronaldo could be very important for the transfer.

What Correio da Manhã does say is that Juventus are not alone in the race, since the likes of Manchester City, Manchester United, Barcelona, Bayern Munich and Atletico Madrid have all made contact for the player as well.

Manchester City aren’t one of the clubs who are most often linked, so it’s notable to see them mentioned in Portugal.

But it seems like these clubs better hurry, because Mendes is in action to get a transfer done. And it’s very likely Félix will be sold for something close to his €120m release clause.