For a few short days, the Catalan media got very excited over the possibility of Barcelona signing Aymeric Laporte.

The defender was described as being unsettled at Manchester City, feeling he wasn’t in a fair fight for a regular starting place. Pep Guardiola, according to the initial reports, hadn’t been communicating his reasoning to Laporte, and therefore the player was starting to feel a little disillusioned.

Barcelona’s route to the signing was to sell a central defender of their own, namely Samuel Umtiti, and then work an exchange operation with Manchester City, likely involving Sergi Roberto somewhere along the way.

However, selling Umtiti is far easier said than done. The Frenchman’s struggles with injury in recent years have been well documented and therefore it’s very much a case of buyer-beware.

On top of that, Umtiti doesn’t want to go anywhere. A Catalan newspaper today published a cartoon of the 27-year-old clinging to the Barcelona badge as an attempt was made to pull him away form it.

He’s on huge wages, having piled a great deal of pressure on the club back when his clause was only €60m. There’s resentment over that, but, for now, he won’t be budged.

Despite all of that, Monday’s edition of Sport insists it won’t completely kill the chance of Sergi Roberto moving to Manchester City. 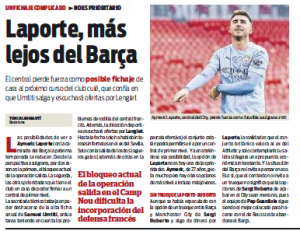 The Premier League champions are described as being ‘best placed’ to make the signing, and, given the Laporte dream is dying, it would be a straight transfer involving no other player.

That would still require Guardiola’s side making a concrete effort.