Home Europe “I have that thorn in my side” – Player admits gripes with...
SHARE

Manchester City defender Angeliño has admitted he has a ‘thorn in his side’ about his time at the club.

The Spanish defender is currently on loan at Bundesliga side RB Leipzig, who he initially joined in the January transfer window before extending that deal in the summer.

His relationship with Manchester City has been something of a rollercoaster, with him initially joining them as a youngster from Deportivo La Coruña in 2013.

He slowly worked his way up through the youth ranks from there before enjoying loan spells with the likes of New York City FC, Girona, Mallorca and NAC Breda.

It has looked like he wouldn’t breakthrough at the Etihad when Manchester City elected to sell him to PSV Eindhoven in 2018, but he was back a year later when City paid £10.8m for him.

He was a regular under Pep Guardiola before a surprise move to Leipzig in January and admits he’s still sore over it.

“I have a thorn in my side as to why I didn’t play more or didn’t fit in,” he told MARCA.

“But that helped me get here, meet the coach, the group, and get to know myself in the Champions League.” 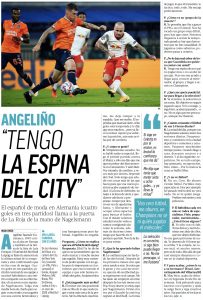 While Angeliño struggled to impress Guardiola and co. at the Etihad, that has not been the case with Julian Nagelsmann at Leipzig.

The German coach has shown unequivocal faith in the Spaniard and been fully rewarded for it, with Angeliño managing five goals and five assists in 24 games for him so far.

Indeed he has started this season on fire, with four goals in six games so far, and puts it down to the backing from his manager.

“The confidence he has given me has been brutal. After the first few months, I think I’m going to get more,” he added.

“I can see that he likes me and that motivates me, that he gives me that freedom to express myself in the field. It has given me a huge boost after the six months with Pep.

“If I’m honest, I’m here because of Nagelsmann. I signed up for him again. The way he plays, what he conveys, the tactics, everything, everything. It fits me perfectly.”