Home Europe Manchester City and their ‘petrodollars’ have become ‘great enemy’ to club over...
SHARE

Manchester City finished the last transfer window without signing a striker despite seeing Sergio Agüero leave the Etihad as a free agent at the end of last season.

The Citizens are expected to be in the market for a new No.9 next summer and Borussia Dortmund star Erling Haaland is set to be on their target list. Mino Raiola has admitted the 21-year-old ‘can go to’ City, Real Madrid, Barcelona or Bayern Munich.

At the weekend, BVB chief Hans-Joachim Watzke confirmed Los Blancos’ interest in the striker and also backed him to move to Spain over England. Meanwhile, Kylian Mbappé remains the main target for the La Liga side and his contract expires in 2022.

Paris Saint-Germain sporting director Leonardo admitted the Ligue 1 giants still have a chance to retain the forward beyond this season.

Claims made by Watzke and Leonardo regarding the Norway international and the World Cup winner respectively are relayed in today’s edition of AS. The newspaper then provides their own information on the duo. 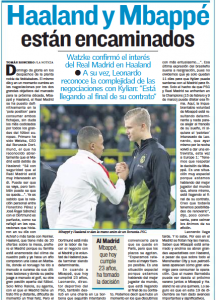 It’s said Mbappé is ‘tied up’ to Real Madrid. With regards to the frontman, the report states a ‘great expectations are opened with Haaland’, despite Pep Guardiola’s side and their ‘petrodollars’ appearing as a ‘great enemy’ to the Spanish giants, to carry out the operation.

City pose as threat to Real Madrid in the race for Haaland, who, as per Raiola, is likely to leave Dortmund after this season.