Manchester City have an ‘agreement’ with Napoli over defender Kalidou Koulibaly but have asked to delay negotiations until the beginning of September.

That’s what Il Mattino and Tuttosport report today, providing the latest update in City’s ongoing pursuit of the centre back.

Pep Guardiola and co are known to be keen on the Senegal defender, with City keen to improve their backline this summer.

Negotiations with Napoli over a move have been underway for some time, but the Italian side’s asking price remains a major sticking point at this moment in time.

Napoli chief Aurelio De Laurentiis is well known to push a hard bargain and has publicly stated on more than one occasion he will demand a top price for Koulibaly after rejecting over €100m last year.

Manchester City are yet to offer what he wants, but, according to Il Mattino, the two clubs have an ‘agreement’, and the ‘situation is well underway’.

What this agreement is, isn’t made clear but Tuttosport say City have asked for negotiations to be halted until the beginning of September. 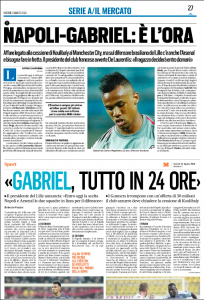 At that point, they will ‘give the green light’ to paying Napoli’s €65m plus bonuses asking price, which in turn will allow Napoli to complete a deal for Lille’s Gabriel Magalhães.

Whether Napoli will wait, however, isn’t made clear. They need the money from Koulibaly’s sale to seal a deal for Gabriel Magalhães, but Arsenal are also pressing for his signature.

Thus, they need to finalise the Koulibaly deal as soon as possible, suggesting they may not be as willing to grant Manchester City’s request as suggested elsewhere.