Portuguese side Benfica have been working on a manoeuvre to anticipate the money of Ruben Dias’ transfer to Manchester City, according to reports today.

Newspaper Record says the Eagles had to sort out the deal in order to immediately have the fee of €68m in their accounts.

When negotiating the defender’s sale back in the last summer, the clubs agreed that the amount would be paid by Manchester City in several instalments.

Now to get it all at once, Benfica had to use a bank who are putting the money up front with an interest of 5%.

Manchester City needed to give the green light, which they did by approving the deal, and will continue paying their instalments normally, this time to the financial institution. 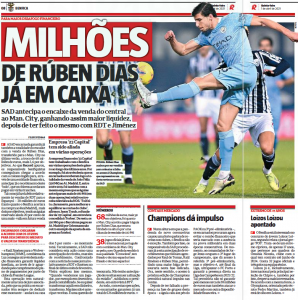 For those wondering, this type of deal isn’t something new at Benfica’s offices.

As pointed out by Record, the Eagles recently did it with the sales of Raul de Tomas to Espanyol and Raul Jimenez to Wolves.

So with this being repeatedly done by the Lisbon side, perhaps they’ll start trying to negotiate fees to be paid in fewer instalments in the future, as they seem to have regretted it lately, needing money quickly.