The first article is about Sporting’s Nuno Mendes, who, according to the outlet, now has Barcelona gunning for him as well.

Record points out there’s a large competition for the 18-year-old, since the two clubs from Manchester have already been following the left-back for a while.

Regarding Manchester City, it’s claimed that Pep Guardiola’s side have already contacted Sporting to know the possibilities of a move.

It’s once again mentioned the Premier League leaders have the transfer of Pedro Porro as an ace up their sleeve, as the Spaniard is currently loaned out to the Lions until the end of the season, and could be used to get a discount when it comes to signing Mendes. 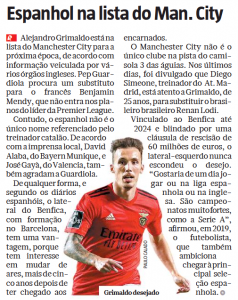 The other story is about Alejandro Grimaldo, for whom the interest from Manchester City was reported by the English media this week.

Record doesn’t seem to know much about it for now. They only take information from other stories to claim that Atlético Madrid appear to be chasing the player as well.

The outlet points out that Grimaldo is protected by a release clause of €60m, and previously revealed his wish to play in England.

Record claims Benfica are planning to sign Ruben Vinagre from Wolverhampton Wanderers in the summer, after cashing in with Grimaldo’s sale, meaning that if Manchester City are interested, the door is clearly opening.