David Alaba has rejected Bayern Munich’s renewal proposal and with a contract expiring at the end of the season, he will be a free agent in the summer.

The 28-year-old is attracting a lot of interest from clubs across Europe and among them are Manchester City. Real Madrid are also credited with an interest.

Los Blancos have Sergio Ramos in their ranks, who also has a contract expiring in the summer and, so far, hasn’t signed a new deal.

Friday’s edition of AS explained the La Liga winners are working on two possibilities, one if Ramos renews and the other if he decides to leave. If it’s the latter, then Alaba has been identified as a target to replace the Spaniard.

Zinedine Zidane’s side are aware they face ‘competition’, ‘Manchester City, above all’, for signing the Bayern contract rebel.

It’s claimed Pep Guardiola’s side are ready to offer Alaba a net salary of €11m net, which is €22m gross per year.

Reports in England have talked about Chelsea’s interest in the defender and Alaba has informed them he needs a five-year contract.

These claims are relayed in today’s newspaper and AS further add the Austrian has also transmitted these requirements to Real Madrid: he wants a five-year deal worth €22m gross per season. 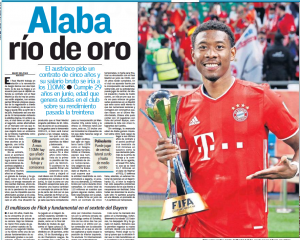 Alaba turns 29 in June and his age ‘raises doubts’ at Real Madrid to invest €110m in wages for the next five seasons, as there are concerns whether he can continue to deliver good performances in his 30s.

He can operate as a centre-back, left-back or in the midfielder, but the doubts raised at Real Madrid could give the Citizens a chance to speed up their efforts to sign Alaba.

Guardiola knows the player very well, having managed him at Bayern, and City will receive further encouragement in their chase for Hansi Flick’s man if Ramos signs a new contract at Santiago Bernabéu.