Home Europe Manager’s will makes signing even harder for Stoke City, things have got...
SHARE

It seems this could really be the end of the line for Bruno Martins Indi at Stoke City. After the Potters didn’t use their buying option over the player, Porto have apparently decided he’ll be kept at the club for next season.

Newspaper Jornal de Notícias has a story today saying the new Porto manager Sérgio Conceição is currently building his squad for next season, and is happy to have Martins Indi and Diego Reyes back at the club.

Stoke City had the option to sign the Dutchman for €10m, and despite Mark Hughes’ statements he would like the club to make the signing, it didn’t happen before the deadline, which was on May 31th. 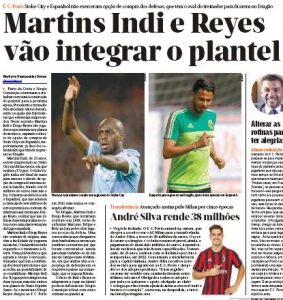 So even if Stoke were thinking of buying the player for another price after the clause expired, this may not be an option now.

Porto will not let Martins Indi go so easily, and after the good season he had, the price will certainly go up.

All of that said, it can’t be denied that Porto are once again in a financial mess, so any reasonable offer from Stoke City will be tempting for the Portuguese club.