When Paulo Fonseca told the world that he still wanted Chris Smalling and he was still in touch with the player, everyone pricked their ears up.

It came after about a week of silence from the Italian media regarding the deal, as it felt like the Serie A side had given up on the Manchester United defender following their acquisition of Marash Kumbulla from Verona.

However, the Portuguese manager’s words renewed everything, as he made clear he still wanted those above to make a push for the centre-back.

They’ve tried, but the nature of Fonseca’s outburst, if you will, has not gone down well at Old Trafford. 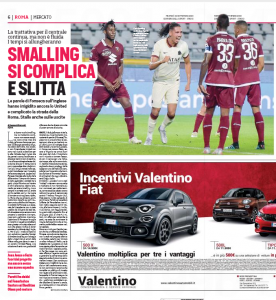 That’s according to Corriere dello Sport, who explain ‘the public announcement of frequent contacts between Fonseca and a member of Manchester han’t been received well by those in charge at the Red Devils, who are less and less prepared to go down to a compromise with the giallorossi’.

Corriere explain Roma are still working on the deal, but the Englishman ‘isn’t a priority’, and the feeling is ‘they’ll talk about it in the last few days of the window after having sold a series of players’.

Those are Juan Jesus and Federico Fazio, but they are proving somewhat difficult to offload for the time being.