The La Liga side signed the defender on a loan deal last summer and his performances for them convinced Unai Emery to retain him.

Saturday’s edition of AS explains the former Arsenal manager wants to keep the Spurs owned player at the club, ‘at all costs’.

When the Yellow Submarine reached an agreement with the north London club for the 23-year-old’s loan transfer, they included a non-mandatory purchase option of €15m.

Having this option would allow the Argentina international to continue at Estadio de la Cerámica, which gives Emery’s side ‘some peace of mind’.

Foyth has a year left on his contract at the north London club and his desire is to continue at Villarreal. 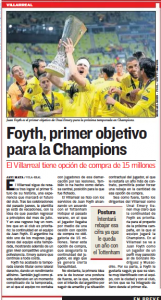 Taking these two factors into account, the Spanish club’s idea is to try to negotiate a lower price with Tottenham, to make the player’s transfer permanent.

Emery and the leaders of Villarreal have it clear that ‘continuity of Foyth’ is a ‘priority’ next season, especially after seuring a place in the Champions League by defeating Manchester United in the Europa League final.