Pascal Struijk has been a regular figure in Leeds United’s starting lineup since their 6-2 defeat at the hands of Manchester United in December.

The 21-year-old, who can operate as both a centre-back and a defensive midfielder, has represented the Netherlands at youth level.

Marcelo Bielsa’s player is yet to make a senior appearance on the international stage and being born in Belgium, he also has the opportunity to represent them.

Earlier this week, reports indicated the Whites player is ready to switch his allegiance from the Netherlands to Belgium.

In this week’s edition, the Premier League player was one of the topics of the discussion and Verheyen was asked whether or not Struijk should represent Belgium.

“You can go along with it. He is a nice, big defender with a good left foot. I saw Leeds-Everton this week. He did not go free with the first goal conceded,” Verheyen said. 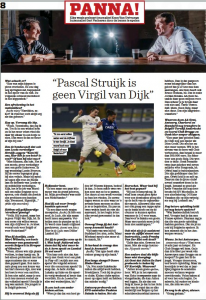 “But he played against his foot and Marcelo Bielsa also let the defence of Leeds defend on the centre line. In any case, it is Martinez’s job to track down such guys, also because that position could be a problem. Possibly…

“He’s good, but he’s not Virgil van Dijk. I would first like to know what his motive is. You choose Belgium or the Netherlands in advance, right?”