Turkish newspaper Sabah report Galatasaray manager Fatih Terim has told the club’s board that keeping hold of Fulham’s Jean Michael Seri should be their priority this summer.

The Ivorian midfielder has proved himself a key player at Galatasaray, and his performances in the second half of the season have been impressive.

Subsequently, Sabah report Galatasaray manager Terim wants him to remain in Istanbul, as he feels Seri will be an important member of his team next season.

It’s reported talks with Fulham have already started with regards to loaning Seri, and much will depend on Fulham’s status next season. The London club remain in the promotion race and can still go up automatically. 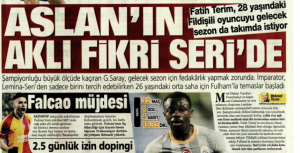 This season the 28 year old has made 32 appearances in all competitions for Galatasaray, scoring one goal and providing four assists.

Cim Bom have the option to make his move permanent for €18m, but that’s highly unlikely given their finances.

Seri’s contract with Fulham will expire at the end of June 2022.