The 23-year old central defender made 30 appearances for Celtic in all competitions last season and has also been linked with a move to Fenerbahce in the past. 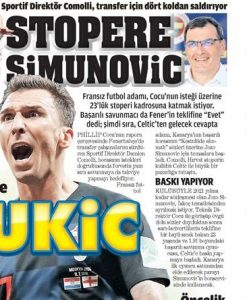 AMK Spor say Simunovic is also keen on the idea of playing for Fenerbahce, and he’s made it clear to Celtic he wants to leave if the Yellow Canaries make an official bid for him.

The Turkish media often insist players are eager to move to their biggest clubs, so there may be some bias involved there.