Despite claims that Bologna had finally decided, after a meeting late last week, to go for Nicolas Dominguez instead of Pedro Obiang, nothing has happened just yet.

The reason for this, according to Corriere dello Sport, appears to be Sinisa Mihajlovic, who has yet to agree to the arrival of the Argentine, favouring the West Ham midfielder’s signing instead.

Wanting a player who fits into the way he plays immediately, the manager is looking no further than his former pupil, whom he had under his wing at Sampdoria a few years ago.

For him, Dominguez would take a couple of months to adapt, time he would like to avoid wasting when a ready made option is there for the taking. 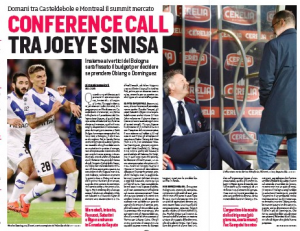 Wages are once again mentioned as an issue, and the fact the West Ham man is six years older than the Velez Sarsfield youngster, yet Mihajlovic appears to be standing firm.

Sassuolo are mentioned as potential competition to sign the Hammers’ midfielder, but they can’t do much until they manage to offload Alfred Duncan first.

This means Bologna remains the likeliest landing spot for the Equatorial Guinea international, and another meeting at the Italian club is expected to take place relatively soon to sort things out once and for all.

Who will win? Tune in later this week to find out.