Liverpool’s Georginio Wijnaldum was linked to Barcelona after they appointed Ronald Koeman as their new manager in August.

The midfielder is in his final year of contract at Anfield and earlier reports suggested the Reds considered sanctioning the 29-year-old’s sale, once they completed Thiago Alcântara’s signing.

Thigao arrived at the Merseyside club last month, while the Netherlands international continued with the Premier League winners even after the window closed on October 5th.

Earlier this month, the 29-year-old admitted there was “nothing concrete” with regards to the La Liga side’s interest in acquiring his services.

Koeman has given an interview to NOS, in which he admitted: “Wijnaldum was on my list.”

This has been relayed by Mundo Deportivo and they add the Blaugrana’s economic conditions made it difficult for them to sign the ex-Newcastle United player in the last window.

The newspaper also looks at the possibility of the Dutchman arriving at the Camp Nou in the future. 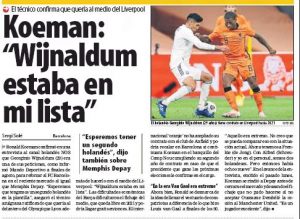 come to Barcelona’, more likely as a free agent next summer, if Koeman still remains in charge of the club after this season.

There’s a question about Koeman’s future because it’s not clear whether the president who wins the election in 2021 will allow him to continue for the next campaign.