Home Premier League Arsenal Why are you doing that – Manager rips into Arsenal loanee after...
SHARE

Arsenal loanee Mohamed Elneny made a disastrous start to his Besiktas career at the weekend after he was sent off during his debut against Gazisehir Gaziantep.

The Egyptian midfielder was shown a red card late into the second half for kicking Larry Kayode and his antics have reportedly angered his new manager Abdullah Avci.

Fotomac claim the Turkish manager was very unhappy with Arsenal owned player after the game and has reportedly told the central midfielder he must improve his behaviour going forward.

As paraphrased by Fotomac, Avci informed Elneny after the game: ‘Why are you doing that? If you didn’t kick the opposition, the game will be played 10 vs. 10. Because of you, we didn’t have a chance to play in the same terms. Please be more careful in the remaining matches.’ 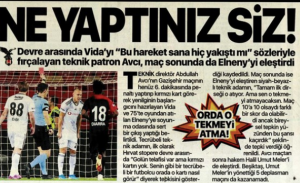 Despite his reckless red card, the Besiktas board aren’t looking to fine him and are expecting he will act more responsibly from now on.

Elneny joined the Black Eagles earlier this month after finding his chances at the Emirates limited in the past 12 months. His move to Istanbul was a chance to kickstart his career following his woes with Arsenal last season.