Home Europe “We had to convince him” – Manager on difficulties signing Manchester City...
SHARE

Manchester City and Pep Guardiola were forced to leave Douglas Luiz out of the squad after the Football Association rejected their request for the Brazilian’s work permit.

Therefore, the Premier League winners needed to find him a new club and at the end of August, we relayed news from Spain that the midfielder was attracting strong interest from FC Porto, Benfica and Fenerbahce.

He spent last season on loan at Girona and had a difficult campaign under Pablo Machin. The La Liga outfit wanted to take him on loan for one more campaign, but the 20-year-old was initially not keen on joining them.

However, the Etihad outfit wanted to loan him to Girona and the latter finally managed to bring the South American to the Estadi Montilivi.

Eusebio Sacristán, the Spanish club’s manager has given an interview to Catalan newspaper Mundo Deportivo, in which he explained how his side had to convince Luiz to join them on a temporary deal.

“I think he can be adapted to perfection as a double pivot or playing alone,” the Girona manager explained. 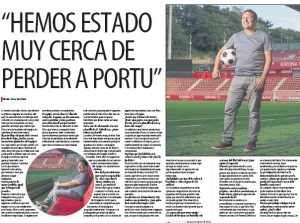 “We had to convince him [to join us] because last season he went through a situation which we did not expect. [But], now you can find here a place to develop. His contribution can help us have a great season.”

Manchester City will certainly hope so.