Yesterday we covered some interesting news from Portugal involving Bruno Lage, essentially knocking the press down a peg or two.

The Benfica boss had sat down in his press conference and revealed the club attempted to sign Lukasz Fabianski from West Ham this summer, a move absolutely nobody had reported.

It was done to prove the newspapers don’t know everything, and it was effective. Well, it seems Fabianski wasn’t the only one they missed out on. There was also Adam Reach at Sheffield Wednesday.

At the end of the press conference, Lage decided to namedrop the Owls midfielder as well.

“Since I’m a nice guy, I’ll give you a name: Adam Reach. He’s a player like Chiquinho, who doesn’t have André Almeida’s moustache but is more like Chris Waddle,” Record report him saying as he departed.

And, according to the newspaper, Reach is a player that was on Benfica’s list this summer and remains there for the future.

Record say the Sheffield Wednesday man was considered as an alternative to Franco Cervi and Andrija Živković, should either of them have departed this summer. 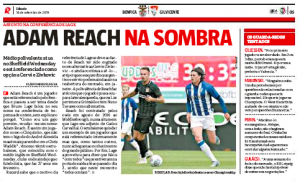 They never did so a move for Reach never happened, but there’s still a chance they might in the January transfer window and thus, Reach remains a player Benfica are keeping tabs on.

Benfica are particularly attracted to his ability to play anywhere on the left-hand side, meaning he can cover left-back as well as the left-wing.

O Jogo back up the claims and say because there was no ‘vacancy’ in the Benfica squad, they never made their move for Reach.

And if anyone was curious as to why Benfica would be looking at a Championship midfielder, then they have an expla 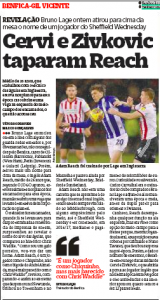 Lage was Carlos Carvalhal’s assistant during his time at Sheffield Wednesday, so worked with the midfielder during their time there and formed a high opinion of him.

The move never happened but, should Benfica’s exit door swing in January, or even next summer, this is one to keep an eye on.