Home Europe “I’d have booed him too” – After trying to force Celtic transfer,...
SHARE

Making his first-appearance for KAS Eupen since deciding to go AWOL in order to force a transfer to Celtic, Henry Onyekuru failed to have the impact he normally does in a 2-0 loss to Waasland-Beveren.

The Nigerian winger cut off all contact with his team when Brendan Rodgers’ side made a €1m+ offer for his services in January, but with no transfer going through, the forward had to return to his club with his tail between his legs, apologising to staff and players alike for his behaviour.

Now having to wait until the summer to, maybe, get his move to Celtic Park, the 19-year-old will have to live with a bunch of boos sent his way from the Eupen fans. 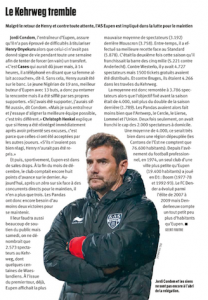 The fans’ behaviour, understandable considering the circumstances, was, interestingly enough, backed by Eupen’s manager, who was forced to play Onyekuru after his starting winger had to rush to hospital when his wife went into labour.

Jordi Condom said, relayed by Sport/Foot: “If I was a fan, I’d have booed him too, but I’m the manager and try to field the strongest team possible. It’s very different.”

With Eupen currently in a surprising relegation fight after being eight points clear at one point, the Celtic target might be used more than anticipated over the coming weeks, much to Condom’s annoyance.

After all, he was only allowed back into the side because the rest of the players accepted his apology.

Had the manager got his way, Onyekuru would have probably been sent to rot in the reserves until the summer.