The 49-year-old coach, who’s currently unemployed, has talked a little about his plans for the future, and the type of job he’s currently looking for.

A couple of months ago, Caixinha had been linked to Sheffield Wednesday, as reports from the English media had claimed he was in a shortlist to replace Garry Monk at Hillsborough.

Speaking to Record, Caixinha was first asked if it’s true he’s been contacted by Brazilian side Vasco da Gama, and responded: “There were only approaches from third parties”.

Then when quizzed about Sheffield Wednesday’s interest, he said: “This situation is somewhat similar to that of Vasco da Gama”.

On what he’s looking for in the next job, Caixinha claimed: “We are looking for a project where there is mutual identification. A project that is structurally building a club and simultaneously fighting for titles.” 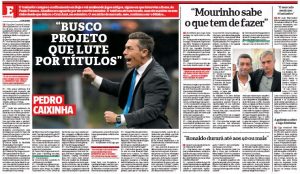 Pedro Caixinha has a little experience in British football, having managed Glasgow Rangers between March and October in 2017. He’s now been asked if the Gers will manage to ‘dethrone’ Celtic in the future.

He said: ‘”Rangers were involved in a process of relegation to the 4th Division that completely removed them, in structural, financial and competitive terms, from the possibility of dethroning Celtic. At that time, the team that had taken the place of Rangers was Aberdeen.

“Nowadays, Rangers and Celtic are second and first, respectively, but the truth is that Rangers haven’t won a trophy yet. Celtic remains one step ahead. I hope that they won’t surpass Rangers in ‘nine in a row’, that is, in the number of leagues won consecutively. Nine, in this case.”

Following his departure from Rangers, Pedro Caixinha went to Mexico, where he managed Cruz Azul until September 2019.

He’s been without a club since then.