Italian newspaper Tuttosport today has a big story about ‘The Sack Race’ in the Premier League.

Most of the information in the article is coming from the English press, such as Everton’s pressure on Marco Silva. There are also some old rumours, like the one linking Mauricio Pochettino to Real Madrid.

But they add something interesting about Manchester United, who could have Maximiliano Allegri as a possible replacement for Ole Gunnar Solskjaer.

They first say that things are calm at Old Trafford, especially because Ed Woodward knows that in case he sacks Solskjaer, he’ll be receiving all the pressure personally. 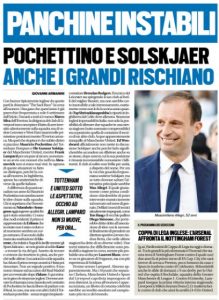 Solskjaer is also said to be backed up by the ‘old Ferguson guard’. But in case things go wrong, then Allegri would be first on the list, claim Tuttosport, and his arrival would require some ‘massive interventions’ in the January market.

Tuttosport also mentions a couple of names such as Diego Simeone and Erik ten Hag, but they are harder targets due to them having jobs. It’s claimed that Laurent Blanc would be a ‘more likely choice’, but it’s really the former Juve boss they believe would be in pole position.