Despite Antonio Conte’s continued optimism (or false placed hope?) that Inter would be able to sign Romelu Lukaku from Manchester United, the Italian media, from what they’ve gathered, are anything but confident.

Take Gazzetta dello Sport, for example, who look at who could realistically replace Mauro Icardi, and they use crude emojis to give their readers a quick indication of where things stand.

Both Edin Dzeko and Rafael Leao (the latest addition to this saga) are both accompanied by a big yellow smiling face, suggesting there’s a good chance something could happen.

The Belgian? He’s given the sad face emoji at its most forlorn state, just shy of shedding a tear.

This comes after a meeting took place on Monday evening between the board and their manager, one where Conte is said to have ‘understood more than ever that Lukaku will probably remain a desire’.

That is, of course, unless the transfer window produces a miracle, and that’s the only thing keeping this saga alive, as Gazzetta explain in other business sectors, without ‘football’s magic’, the deal would be considered dead and buried. 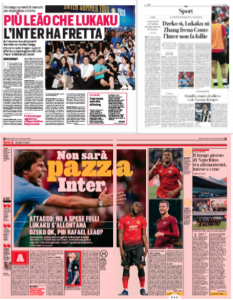 The easiest miracle to pull off would be the sale of Mauro Icardi, and should that happen soon, ‘a new attempt for the Belgian isn’t to be excluded’.

We now move onto Corriere dello Sport, who boast a similar narrative, where it’s reported two new forwards will be bought, but it’s unlikely to be Edin Dzeko and Romelu Lukaku.

The more realistic duo would be the former Manchester City striker and Lille’s Rafael Leao, or even Duvan Zapata.

They believe the ‘true key’ to getting the Manchester United forward would be to offer the Red Devils cash + a player, and if they could accept the idea of Ivan Perisic (which seems very unlikely), that would be swell.

That’s not all, folks, because we have a guest appearance from La Repubblica today too, who, and don’t be too shocked, also believe a deal for Lukaku would be very difficult.

Their version is similar to Gazzetta’s, explaining that Monday’s meeting saw the Belgium international ‘slowly disappear from Conte’s dreams’ because he ‘costs more than Inter both intend to spend or can afford’.

Rafael Leao is once again pushed as the alternative, costing about half the price.

Gazzetta were right. This whole thing really is a sad face emoji.