Ronald Koeman wanted Barcelona to strengthen his defence by signing Eric García from Manchester City in the last window.

The La Liga side failed to sign the centre-back because they failed to meet the Citizens’ demands.

Two days ago, Koeman admitted García’s signing in January will depend on Pep Guardiola’s side and also revealed the club are short of options in “some positions”.

Barca lack options in the heart of the back four as the Dutchman is left with Gerard Piqué, Clément Lenglet, Samuel Umtiti and Ronald Araújo as the only recognised centre-backs in the squad.

Araújo is currently sidelined, while the former Lyon star, who has struggled with multiple injuries over the past few years, hasn’t featured for Barcelona this season.

Friday’s edition of AS explains Umtiti is ‘transferable’ for the Catalan club in the winter market, but a move for the 26-year-old will depend on an external factor. 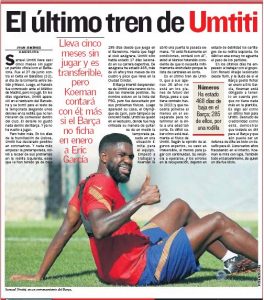 It’s claimed Koeman will be ‘obliged’ to retain the World Cup winner if Barcelona ‘doesn’t sign’ García from City in January.

That’s because the manager has no other option but to retain Umtiti, if a new centre-back doesn’t come through the club’s door at the start of next year.

García’s contract expires after this season and it remains to be seen what the Premier League side will do with the Spain international in the mid-season window.