Maurizio Sarri did not consider an offer from Tottenham amid fears about too much travelling and the dangers involved with COVID-19.

That’s according to Corriere Dello Sport, who cover the Italian manager’s future today as he nears a move to Roma.

They explain that Roma made the decision to replace their current manager, Paulo Fonseca, months ago, but the ‘humiliating’ defeat to Manchester United in the Europa League this week has sped up the process.

The choice for his replacement was made months ago, with club chief Dan Friedkin having decided he wants Maurizio Sarri in the hotseat.

Sarri is keen on the job but will only start negotiations when he is completely free from Juventus, who he left last summer after just one year in charge.

When that issue is sorted, Roma will offer him a two-year deal worth €4.5m a year, and the only thing missing on that agreement is his signature.

A new meeting between Sarri’s agent Fali Ramadani and Roma director of football Tiago Pinto is planned for the next few days, and the deal will be finalised when everything is tied up with Juventus, which is expected sometime this month.

Sarri is ‘ready to say yes’ to Roma and is not interested in offers from elsewhere, with Tottenham claimed to have made an offer. 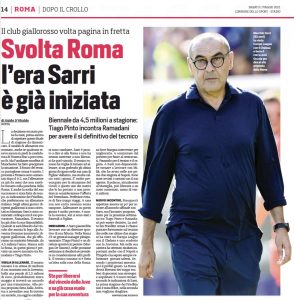 The nature of that bid isn’t made clear, but it’s stated that Sarri ‘did not consider’ the offer from Spurs because of worries around COVID.

He is currently resting in his house Figline Valdarno, studying football daily, but is ‘very worried’ about the current situation regarding the virus, so much so that nobody is allowed to enter his home without being tested first.

He ‘prefers to avoid too many trips’ and as such, a move back to England to take the Tottenham job was ruled out.

He’s now ready to sign up with Roma instead, leaving Tottenham to find another candidate on a list of options that is growing shorter by the day.