As active as they were purchasing players during the last transfer window, Chelsea were also a name often mentioned when it came to exits.

The Blues had a number of men they were prepared to sell at the right price, with N’Golo Kanté reportedly one of them.

Inter were strongly linked with the Frenchman due to Antonio Conte’s admiration for what the midfielder has to offer on the football pitch, but the Serie A side, having spent elsewhere, never put the money on the table necessary to convince Marina Granovskaia to let their prized asset go.

Fast forward a month or so, and Kanté’s name hasn’t disappeared from the Italian media, as Gazzetta dello Sport mention him on Tuesday.

Looking at the start to the campaign of both Juventus and Inter, the newspaper explain there is one piece missing in Conte’s squad.

They state ‘the name of Kanté, or an alternative of a similar technical profile,’ is what the Italian manager needed to ‘technically complete his team’. 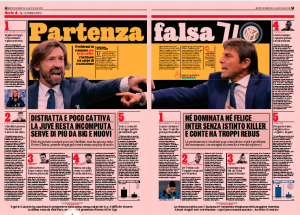 It’s pointed out he doesn’t necessarily need the France international, but we all know that’s who he’d want should he be given the opportunity.

They require someone to play in front of the defence, which few of their current men can do properly; a role Kanté has demonstrated to shine in when placed there.

Make of their failed efforts in the last window what you will, but with Inter currently sat seventh in the table after seven games and a board still keen to give Conte what he wants, you can rest assured this story is far from over.

Brace yourselves for some more rumours in January.