With a cloud of uncertainty floating over Bruno Génésio’s head, the rumours surrounding the Lyon managerial position continue to circulate.

Following a report in L’Equipe that a move for Laurent Blanc had been made, the Ligue 1 side released an official statement quashing the speculation, explaining they will wait until the end of the season to make a decision.

While Lyon and the former Paris Saint-Germain manager could be a match made in heaven, Le Parisien reveal on Monday the 53-year-old is keeping his options open, and has a couple of potential jobs in mind, which includes taking over at Chelsea.

The French newspaper explain Blanc is ‘keeping an eye’ on the situation at Stamford Bridge, as well as Sevilla, two clubs who contacted him in recent years when they had previous vacancies. 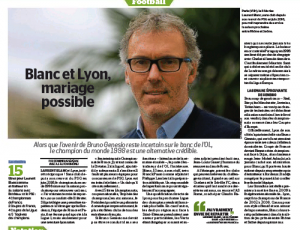 Chelsea ‘could represent an exciting challenge’ for the ex-France international, as could AS Roma, who will most likely part ways with Claudio Ranieri at the end of the season.

Despite an improvement in his team’s form, Maurizio Sarri’s future at Stamford Bridge remains far from secure, with qualification for the Champions League clearly a priority for the Blues’ board.

If he fails to clinch it either via the Premier League’s top four or through winning the Europa League, then Laurent Blanc appears ready to pounce and offer his services once more, having already come close to getting the job last summer.