After finishing the season 3rd in the Super Lig, the Turkish side are looking for attacking reinforcements and Posta claim the 22 year old winger is one of the players they are currently looking at.

It’s reported Fenerbahce manager Emre Belozoglu, whose future is currently uncertain, has asked his board about the possibility of signing Djenepo. They recently brought in Bright Osayi-Samuel from Queens Park Rangers but Emre is still keen to add to his attacking options for next season.

Given their financial situation, it’s unlikely Fener could make a permanent move for the Malian winger, but Posta believe a loan could be on the cards. 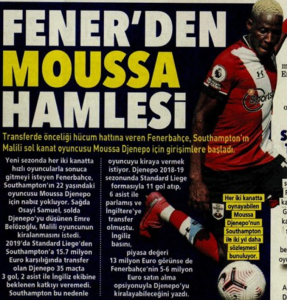 Djenepo joined Southampton from Standard Liege in 2019 for €15.7m and has mainly been a squad player for Ralph Hassenhüttl’s side this season, making 27 appearances in the Premier League and scoring one goal.

His contract with the Premier League club will expire at the end of June 2023.