Ever since stories started to emerge about a potential Mauricio Pochettino return to Tottenham, it feels that’s all we’ve written about when it comes to the north London club.

The news has dominated the Spurs media sphere, for good reason, as the Argentine making a comeback to his former club less than two years after being sacked would be quite the surprise.

However, with multiple reports of Pochettino having a chat with Daniel Levy, it’s very, very hard to ignore.

Most of the French media, while acknowledging that contact has been made, seem fairly confident that Paris Saint-Germain will hold onto their man, but Le Parisien do open the door to an exit somewhat.

Looking at whether the Ligue 1 runners-up and Pochettino could already part ways, they explain Levy and his former manager ‘are talking about an eventual return to London’ and the ex-defender ‘doesn’t close the door to that idea’, despite him only arriving in early January.

The Paris Saint-Germain man is reportedly ‘disappointed of his first five months in the capital, with in particular a turbulent relationship with Leonardo, the director of football’.

The 49-year-old is ‘disappointed by the Brazilian’s stewardship in a club where stars dominate, sometimes above the club and therefore the manager’, which was something Thomas Tuchel also observed and got frustrated with during his time there. 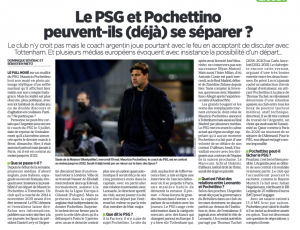 It’s worth pointing out that no player at the club ‘has been alerted of an exit from the manager himself or someone else at the club’, and there is no ‘subject Pochettino’ within the building as things stand.

That being said, it’s ‘well and truly possible’ that the Argentine could drop Paris Saint-Germain, as he can ‘free himself of his contract if he really wants to leave’, with any interested party capable of buying him out, just like Bayern Munich did with Julian Nagelsmann.

Basically, ‘everything is now a matter of negotiations, even if he does stay’.

None of this is as optimistic as other reports in France, suggesting there’s some worry seeping in that Pochettino could push for an exit if he decides enough is enough.