Former Anderlecht manager René Weiler has been speaking to Het Nieuwsblad and hit back at accusations he didn’t give youngsters enough of a chance at the Belgian club.

Quoted by Het Nieuwsblad, the manager, currently with Lucerne in his native Switzerland, explained: “And Tielemans? And Dendoncker? Are not they young? I often had Roef and Sowah play, four youngsters in a season, that’s not bad, and the most important thing was the title.

“I have made Tielemans and Dendoncker the engine of the team and had them evolve: ultimately Tielemans was sold for a record amount and Dendoncker also delivered a lot of money, even though he lost value in the season after my departure.”

That final sentence certainly holds some truth, because Anderlecht had been pushing figures to the media as high as €38m for a possible Dendoncker transfer. That was way over the top and the player was prevented from moving until this summer, when he transferred to Wolves for around €15m.

Weiler clearly feels that had he continued with the player then he would have been worth more on the market, and he may have a point. 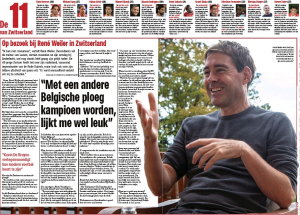 Anderlecht continually pushing false figures out to the Belgian media, and transfers not happening, put increased doubt around the Wolves player.

Then there’s him now being considered more of a central defender than a midfielder, which may have also impacted upon his value.