The Argentine media is once again full of stories on the future of Manchester United defender Marcos Rojo today.

One of the outlets who highlight the player is newspaper Olé, who feature him on their front page and analyse the signing that Boca Juniors could make.

They first highlight all of Marcos Rojo’s stats in European football, pointing out he hasn’t played there for a year, and then comment on how possible the signing is.

“Maybe next week we will have everything settled,” a source from the club told Olé, who insist that there’s a verbal agreement with the defender. 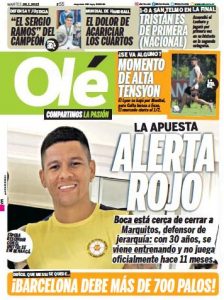 However, the competition for the Manchester United defender seems to be growing, with more clubs joining the race each day.

On Monday night, journalist Nicolás Bozza reported that Boca Juniors’ rivals River Plate are now in for the signing as well, as manager Marcelo Gallardo contacted Rojo and the player was ‘delighted’ with their conversation.

Other outlets such as El Día now claim that besides Boca Juniors and River Plate, the likes of Estudiantes, Cruz Azul and Getafe are all making the same chase, making the competition a lot more exciting, but with no big details on how it’s going.

As Rojo’s contract with Manchester United expires in the summer, everything indicates he’ll end up moving for free.

Club ‘expecting’ €20m for player, Arsenal and Wolves in picture for...

Celtic outcast fights back after being labelled ‘arrogant and introverted’ in...

“The genius wolf” – Wolves star gets praise in home country...