Takvim claim Besiktas manager Sergen Yalcin has held talks with the club’s board about transfers for next season.

The Turkish newspaper report that during the meeting, Arsenal loanee Mohamed Elneny’s name came to the table and Yalcin wants to see the Egyptian midfielder in his team next season.

The Besiktas legend reportedly said that Elneny ‘would work wonders’ in his team for next season and he’s asked the Besiktas board to keep the Arsenal owned player beyond this campaign.

Elneny has been one of the most consistent performers in Besiktas’ team this season, and it seems that Yalcin is also pleased with his performances since he took charge at the club. 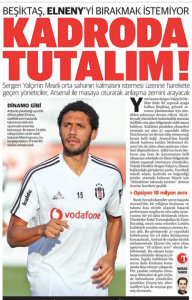 If he remains at the Vodafone Park, Yalcin believes the former Basel midfielder will be an integral part of his team.

The 27 year old has made 28 appearances for the Black Eagles in all competitions this season and his contract with Arsenal will expire at the end of June 2022.