Chelsea manager Frank Lampard had initially informed Antonio Rüdiger he would not count on him this season, but he later included the Germany international in his plans after the player failed to get a move away from Stamford Bridge in the summer.

Earlier in October, RMC Sport reported Paris Saint-Germain manager Thomas Tuchel wanted his side to sign the centre-back in the last window.

Wednesday’s edition of Le Parisien explains the ex-Borussia Dortmund manager has ‘not changed his mind’ after failing to sign his compatriot in the last window .

It’s claimed Tuchel ‘still wants to sign’ the 27-year-old in the winter market.

The former AS Roma man has lost his place at Chelsea as Lampard has relied heavily on Kurt Zouma and Thiago Silva.

Rüdiger has only one league appearance this term, and the newspaper are of the 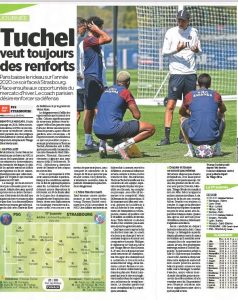 belief his current situation with the Blues is an indication the player is not valued by his manager.

Le Parisien explain PSG will ‘try everything to strengthen’ their squad in January.

With regards to Rüdiger, the report adds the ‘case looks just as complicated as it did a few weeks ago’.

There isn’t any explanation as to why the ‘case’ remains ‘complicated’.