Home Championship “My manager is great and likes me” – Nelson Oliveira rules out...
SHARE

Nelson Oliveira’s goalscoring celebration directed at manager Daniel Farke went totally viral, so the Portuguese press have been covering the situation since.

The Norwich City striker has a big story about him in today’s edition of Record, which is actually born from a rumour related to that event.

The newspaper is covering gossip from the Portuguese press which said Wolves would take a chance and try to sign him this summer, as the club believe the situation between Norwich player and manager is still not good.

So Record called Oliveira himself to comment on the chances of this transfer, and the player didn’t want to feed it too much. 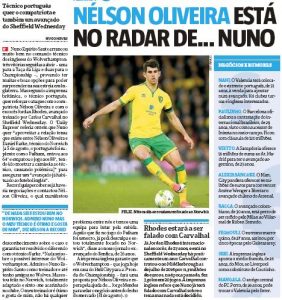 Speaking to the newspaper, the striker said: “I know nothing about Wolves’ possible interest. I admire Nuno Espírito Santo as a manager and I even have friends at Wolves. But I’m happy at Norwich, totally adapted and I feel loved at the club.

“My manager is great and likes me, there isn’t any problem between us and we have a team to fight for promotion. What I did in the game against Fulham was a mistake, I’ve already apologised and I’m totally focused on Norwich.”

Signed from Benfica last summer, Oliveira had a decent first season in England, scoring 15 goals in 32 matches. Despite being on the bench in the past few games, he’s keeping a good record this season as well: one goal in only 48 minutes played.