AS are not holding back while criticising Jose Mourinho and they have a story about Manchester United’s next managerial appointment in today’s edition of the newspaper.

The headline of the report reads: ‘Zidane, United’s goal to forget the Mourinho era’

For AS, Zidane is the main candidate to take charge at Old Trafford after Ole Gunnar Solskaer’s temporary spell is over.

The Frenchman is without a job since resigning from the managerial position at Real Madrid in May, meaning it would have been easy for the Red Devils to appoint him right away rather than bringing him to the club next summer.

It’s explained in the report that the former midfielder has no plans to return to the bench before next June, due to sporting and family reasons.

For this reason, United executive chairman Ed Woodward has appointed Solskjaer to manage the club until the end of the season.

A source close to Zidane claims that if he accepts the 20-time English champions’ offer, he will be one of the highest paid managers in the world and United (read Woodward) will give him a free hand when it comes to signings.

AS also mentions former Arsenal manager Arsene Wenger has backed him to accept the offer from the Premier League giants, who have already tabled a proposal for him. 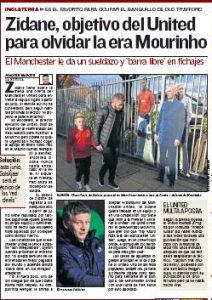 So far, Zidane has not accepted the offer, but a source claims the “project seems attractive”.

It’ll be interesting to see how things develop from now until the next summer as Manchester United continue their search for a new manager for next season.