With just five appearances to his name in a Leeds United shirt before the start of the campaign, Pascal Struijk had barely started his career as a professional, but that didn’t stop Marcelo Bielsa throwing him in at the deep end in the first game against Liverpool.

They shipped four goals that game, and the young centre-back went back to the bench for the next few matches, making just three league appearances between September 19th and December 20th.

Since the 6-2 loss against Manchester United, however, the 21-year-old has been an immovable object in Bielsa’s defence, which has caused some to take notice.

That includes Roberto Martínez, the Belgium national team manager, who is doing his best to convince the Deurne (near Antwerp) born player to switch allegiances.

Also a Dutch national, whom he’s represented at U17 level, Struijk has received a phone call, according the HLN in Belgium, from the Spaniard to ask him ‘whether he would like to play football’ for Belgium.

‘Eligible for a Belgian passport’, the Leeds man admitted last March he would ‘find a phone call from Martínez a great honour, but that he prefers’ the Dutch national team.

That being said, he also added that if they stopped calling him up ‘and the Belgian national manager is willing to give him a chance, then he would certainly’ swap.

In need of a left-footed centre-back with both Jan Vertonghen and Thomas Vermaelen being 33 and 35 respectively, Martínez sees Struijk as a potential successor to the pair, having also rung Elias Cobbaut and Hannes Delcroix.

The Belgium manager wants his defence to be able to recycle the ball quickly and effectively, and following the train of thought of both Pep Guardiola and now Mikel Arteta, having someone in the Aymeric Laporte ilk helps him achieve that. 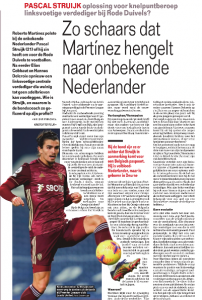 While it may have its disadvantages, Martínez sees this somewhat rare quality as the ‘benefits outweighing the potential problems’, and with only 20% of centre-backs being left-footed per a 2009 research, there aren’t that many to choose from.

As HLN put it, ‘the pond is therefore a lot smaller’ and ‘if a fish with dual national suddenly surfaces, it would be crazy not to cast the line’.