The Mexico international is expected to return at some point this season, but there have been reports suggesting the club could bring in a new attacker in January.

On December 4th, AS reported the Premier League side ‘think’ of signing Valencia’s Maxi Gómez.

It was also stated a ‘great offer’ from Wolves would make Los Ches owner Peter Lim think about sanctioning the Uruguayan’s sale, as the La Liga side must offload a few of their players in the winter market in order to address their financial issues.

Valencia president Anil Murthy has admitted there will be more sales and his comments have been relayed in today’s edition of AS.

Javi Gracia was promised new additions in the summer, but the La Liga side didn’t bring in players requested by their manager. 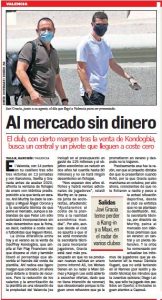 bring new faces to Mestalla, AS adds the former Watford manager ‘fears losing’ the 24-year-old, who is in the ‘radar’ of Wolves, and Kang-in Lee in January.

Gracia is ‘more concerned’ about losing the pair, mostly because of the possibility of not having any new players arrive at the club.

On Monday, Super Deporte explained Nuno Espírito Santo’s side won’t ‘make an investment’ required to take Gomez away from Valencia, and this would come as a welcome news for Gracia.